YOU CAN MEET GOD IN HELL

I’m not perfect and neither are you; nor anyone that ever lived. Unless you aren’t human; there’s no way you can be without fault. If so, why do people judge people?

• Why do you criticize what you can’t analyze?

• Why do you always condemn and never consoled?

• Who made you a Judge over other People’s actions and reactions?

• Why do you wish for God to destroy his creations?

• Do you spend more time asking for God’s blessings; or are you busy the whole time, praying on him to destroy your enemies?

• Who made who righteous?

• Who told you that you are different?

• Do you take time to reason before you pray?

• Do you listen to yourself when you pray, or are you so engulfed in your rap battles?

• You want the heavens to open, not to shower blessings on you; but to rain down misfortunes on your enemies?

• Who is your enemy?

• What are the criteria for being your enemy?

• Have you seen God? 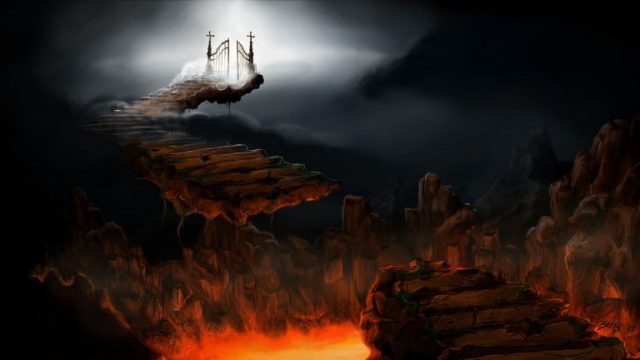 Of course not! You only have an inserted picture of God in mind; taken, edited and printed on Earth by we humans. Whatever the religion, none know God; just passing around what was passed around. If only we know God, the world will be less vile and evil. We cannot know God and still be filled with hate for one another. Don’t you see that? That’s the essence of religion; to condemn others who don’t believe with us and act religiously like us the way we do. Then, who’s way is the right way?

• Religion condemning Religion for being a different Religion.

• Christians hating on other Christians for belonging to a different church.

• Others tagging others Pagans for obeying their own religion.

• Muslims acclaiming that others who don’t believe in Islam are Infidels.

• Shiite hating on Sunni; Sunni mocking the Shiites for being too extreme.

• Others tagging others Atheists for choosing to believe in nothing; isn’t it a choice?

In furtherance of the above, the behavior of we humans can be compared to the moon; which only shows the Earth its bright side while hiding its dark side from us. Man is evil by nature but only reflects the good side; until provoked beyond pretense. We are the God and at the same time the Devil, the difference is in the situations we are involved in; man is capable of doing both good and evil. Yet, some people behave like they don’t have a dark side; they judge others for sinning differently.

Amidst the pretenses; we all know ourselves better. But, as to why some people are acting judges here on Earth; is a reason we are yet to comprehend. Listen now let me clear you like you have never been cleared before, you are not good; it’s all an act like other acts. You are capable of all attitudes depending on who, what and where you are dealing with. If you focus on the bad in others; it is because you are equally bad. The same with seeing the good in others; for we are the architect of everything on Earth.

Furthermore, I need to break down the facts for you; before you misinterpret the title of this message. I only need you to reason constructively, before you criticize destructively. Your self-judgmental attitude contributes so much to how you treat people, and how people treat you. While you are busy condemning, you met God and condemned him too. You wouldn’t know, because you don’t know God; and you treat people like trash. Meanwhile, how would you recognize God? Maybe, you are the type hoping to meet God in places of worship; you only pay respect to people you think are self-acclaimed religious like you. You wouldn’t believe that the Criminal, Prostitute, Alcoholic, Smoker, Womanizer and the rest of anything bad as you like to classify them can make paradise in the afterlife; who are you dear? Definitely not God; the world would be void if you are. You couldn’t wait till judgement day; you're already separating the grain from the chaff here on Earth. All hail thee, Angel of judgement; you are more righteous than the saints.

Consequently, while you are busy making conclusions on who’s good and who’s bad; you are cutting off people capable of helping you at the same time. Look around you brethren, you are surrounded by the same people you are condemning; God is yet to wipe them out of the surface of the Earth as you wished and prayed. Your enemies are still progressing at a higher rate more than you hoped; later you would lament of how the unrighteous are ruling over the children of God. When was the last time you rechecked that your birth certificate from heaven? Could it be that your father Lord has abandoned you the legitimate child, to take care of his illegitimate children?

In perpetuation, you have to look beyond your belief; to see clearly that other people’s beliefs matter too. Even the man that believes in nothing believe in tomorrow, you can meet your helper in the direction you refused to take. Desist from misleading yourself, for you could be lost in your oblivious belief. If truly that man was created in the image of God, as the Bible made us believe; then, man is a god. Who is the devil? Man!

Dearly Beloved; since you can come to terms with the belief that God is everywhere; that means that you can find God not only in places of worship but also in workplaces, brothels, nightclubs, pubs, Den of thieves and the worst of locations as you would describe them. The people in those awkward places as you would term it also pray like you pray; nobody is beyond redemption. According to Job 2:1: “when the day came for the heavenly beings to appear before the Lord God again, Satan was there among them”. Always remember, never be the reason why you can’t reason with people. You can meet the Devil in Heaven, just like you can meet God in Hell. Before you hate, love. Before you die, live. People don’t choose themselves, but people accept themselves.